Many tourists take advantage of the opportunity of their Israeli tour and spend a few days in Jordan, our neighbor to the east. Jordan is so close, so beautiful and surprising, unique, and diverse.

The recommended excursion program for a tour in Jordan is two to four days.  Jordan is very hospitable and friendly.  Welcoming people who make a wonderful experience. The tourist service consciousness is high, everybody is very happy to talk and help.

We can have together an enjoyable mixture of extreme nature, incredible antique sites, river walks, hot spring baths, a visit to Petra, and a jeep tour in the Wadi Ram desert. I can take care of all your needs in Jordan: guidance, transportation, hotels, etc.

The starting point of the tour in Jordan is the northern border crossing Sheikh Hussein near Beit She’an. We will cross the political border over the Jordan River while traveling.

Jerash, containing the ruins of the Greco-Roman city of Jarasa, was once one of the most important cities in the Near East. It is the second most visited site in Jordan, after Petra. Jarash is the largest, most complete, and prereserved Roman city to be found in the Middle East; no wonder it was nicknamed ‘Pompeii of the East’. In the city, we can see many astonishing monuments, theaters, hippodrome, gates, temples, streets, and masses of columns.

In Ma'in Hot Springs, we will visit thermal mineral hot springs and waterfalls. Hot water gushes out in waterfalls. Bathing in the pools during the sunset by the end of a day will be a relaxing and enjoyable end of the day.

Mount Nebo – Here is the place where Moses stood, facing west, toward the north end of the Dead Sea, Jericho, and the Jordan Valley.  We will read in the book of Deuteronomy: “Then the Lord said to him, “This is the land of which I swore to give Abraham, Isaac, and Jacob, saying, ‘I will give it to your descendants.’ I have caused you to see it with your eyes, but you shall not cross over there.”

The Madaba map was incorporated into a mosaic floor in the sixth century AD. It is the oldest map depicting the Land of Israel and its cities. Seeing the map of Madaba, which shows ‘the Holy City of Jerusalem’ in the center of the map, is very interesting. The scale of Jerusalem is ten times bigger in comparison to the rest of the map. The archeological excavations conducted in the Old City of Jerusalem after 1967 were partly assisted by the Madaba map.  The Byzantine cardo in Jerusalem was found and excavated according to the map as well.

Petra, the capital of the Nabatean kingdom, is a pearl from the golden age of the Nabateans, during which they created their great wealth. About 1,000 burial monuments and massive temples are carved in colored sandstone rocks. It is difficult to estimate the amount of ant work required to carve in the sandstone these fantastic monuments. The findings are sculpted with Nabatean, Greek, and Roman influences.

Climbing to a-Dir, west of Petra, is terrific. It is a great monument, even more impressive than the famous Chazaneh. The area is reminiscent of the Sinai Mountains. This is as a result of the formation of the Syrian African rift valley. Transjordan moved about 105 km north, in comparison to the western bank of the Jordan river.

If we go up the mountains above Petra, we can look out over Mount Hor and see Nabi Haron, the burial place of Aaron, the High Priest, and read in the bible: " And the Lord spoke to Moses and Aaron in Mount Hor by the border of the land of Edom, saying: “Aaron shall be gathered to his people, for he shall not enter the land which I have given to the children of Israel” (Numbers, 20:23-24).

Wadi Ram – located in southern Jordan, towards the Jordanian border with Saudi Arabia. After a fantastic Bedouin dinner, we will stay overnight in tents, wrapped in the serene atmosphere of the desert. We will ride the Bedouin Toyota Jeep in the sand dune, exploring sculptured mountains around us. Visit massive arches, a French citadel designed for film making, and more. It is wild nature, mighty granite mountains, dunes, sandstone canyons, and ancient rock inscriptions.

We will return to Israel via the Arava crossing, close to Eilat, this time crossing the border on foot. 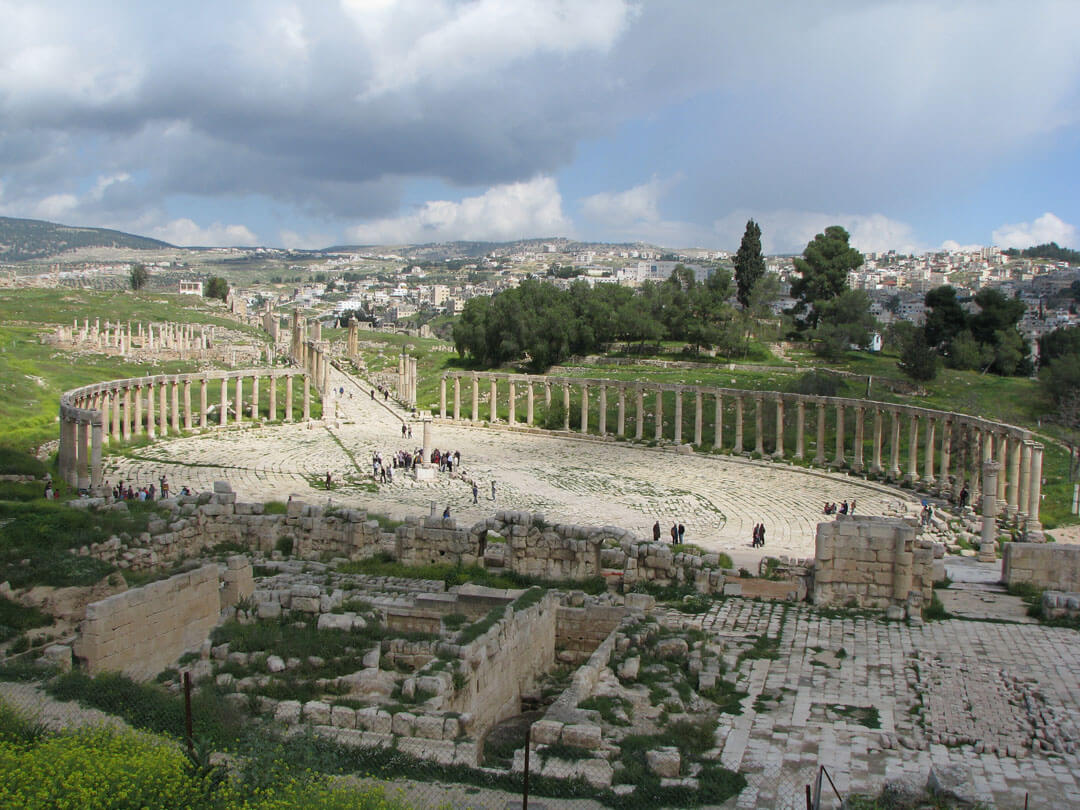 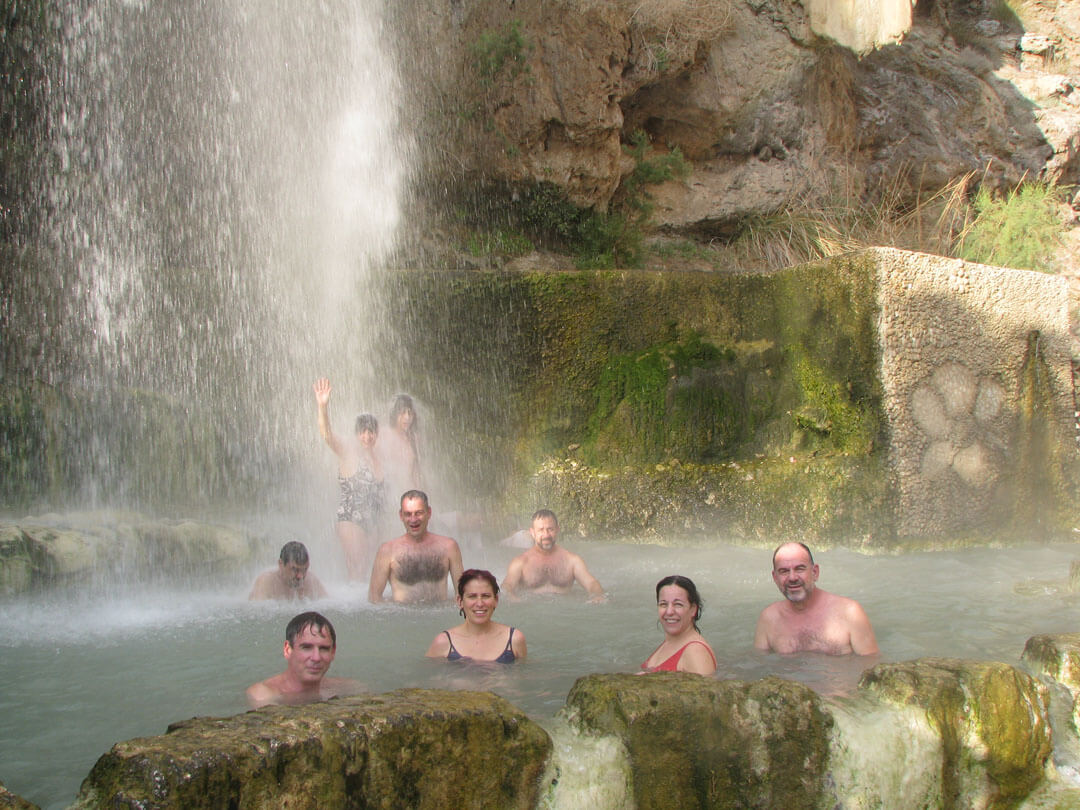 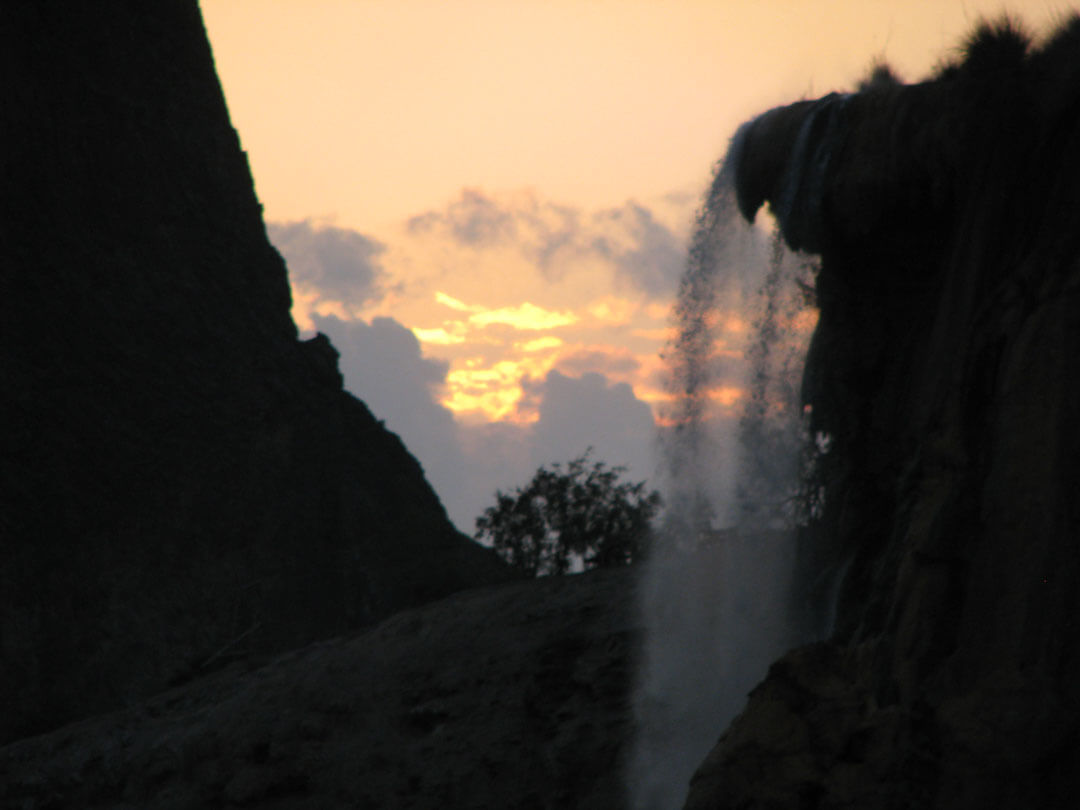 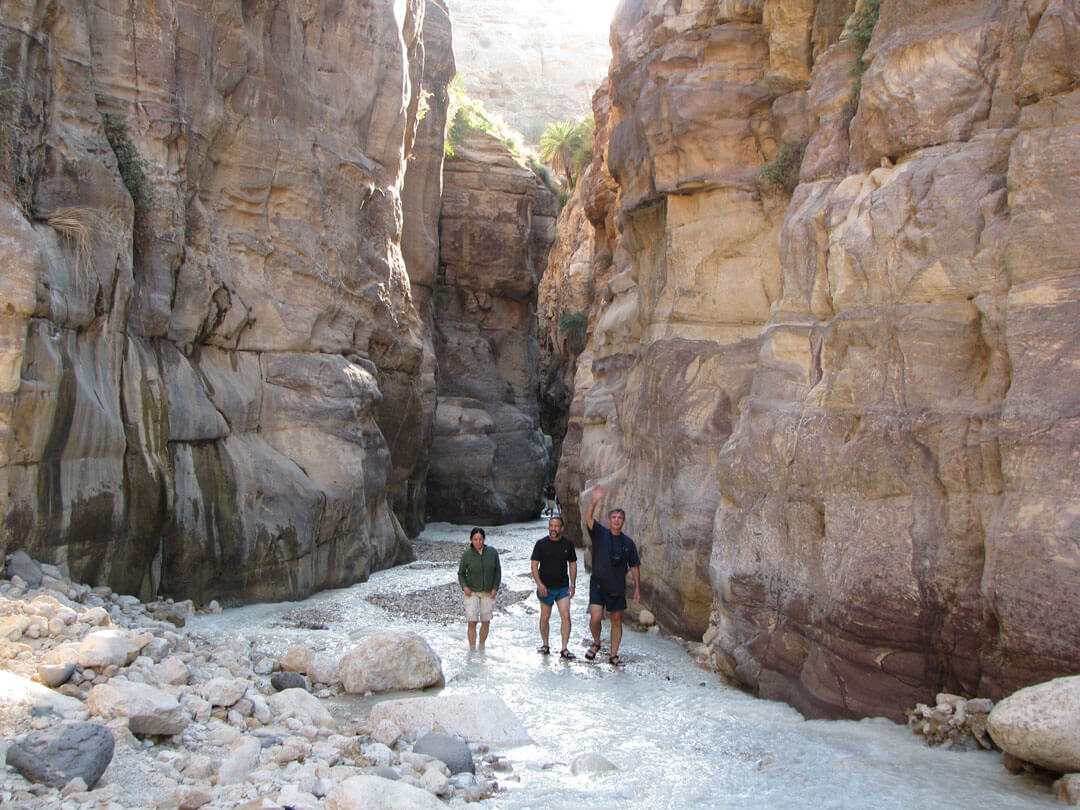 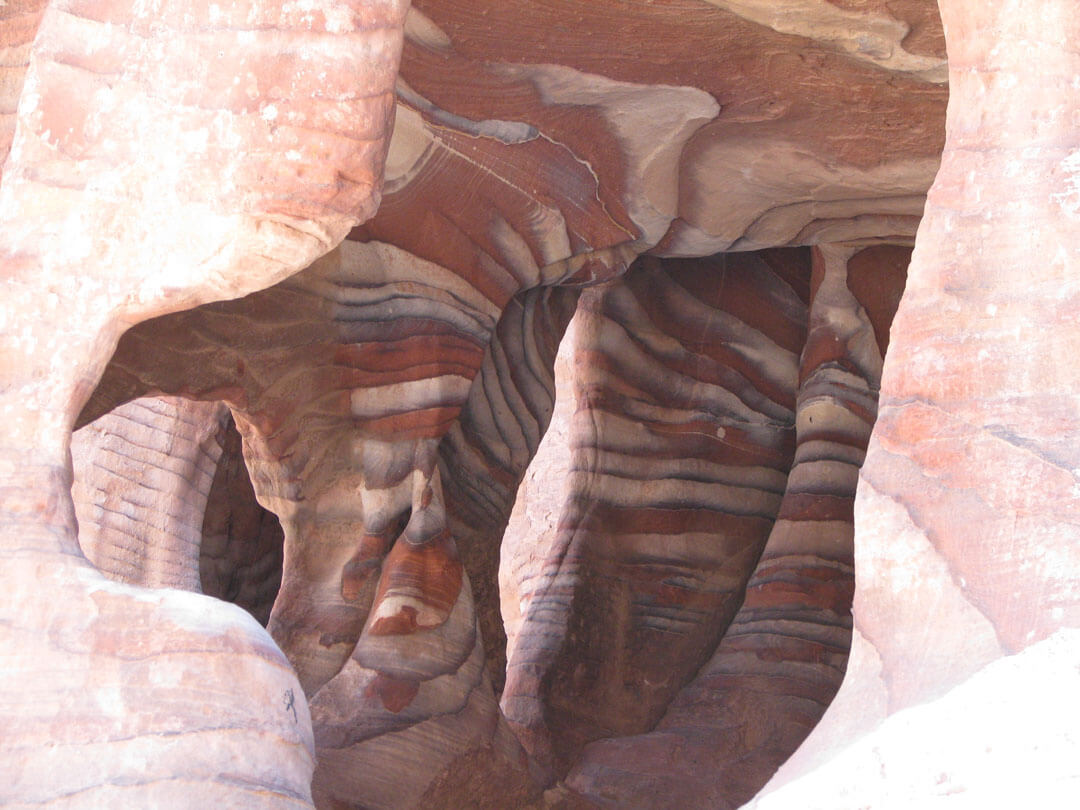 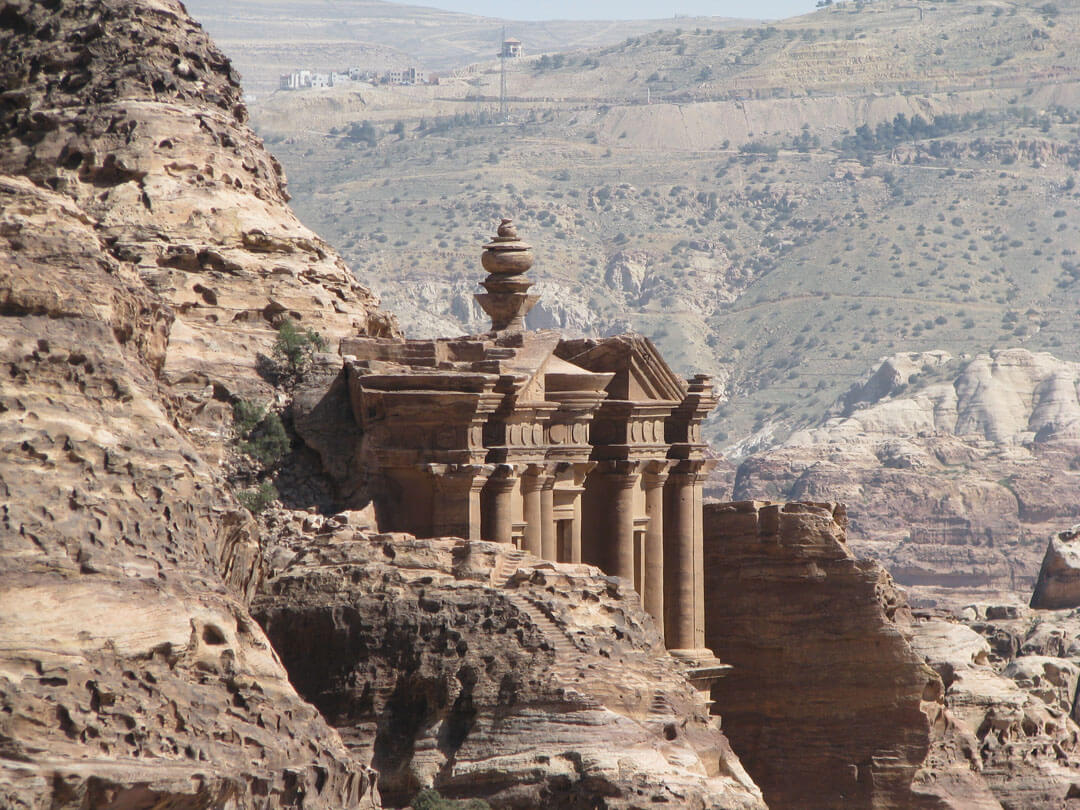 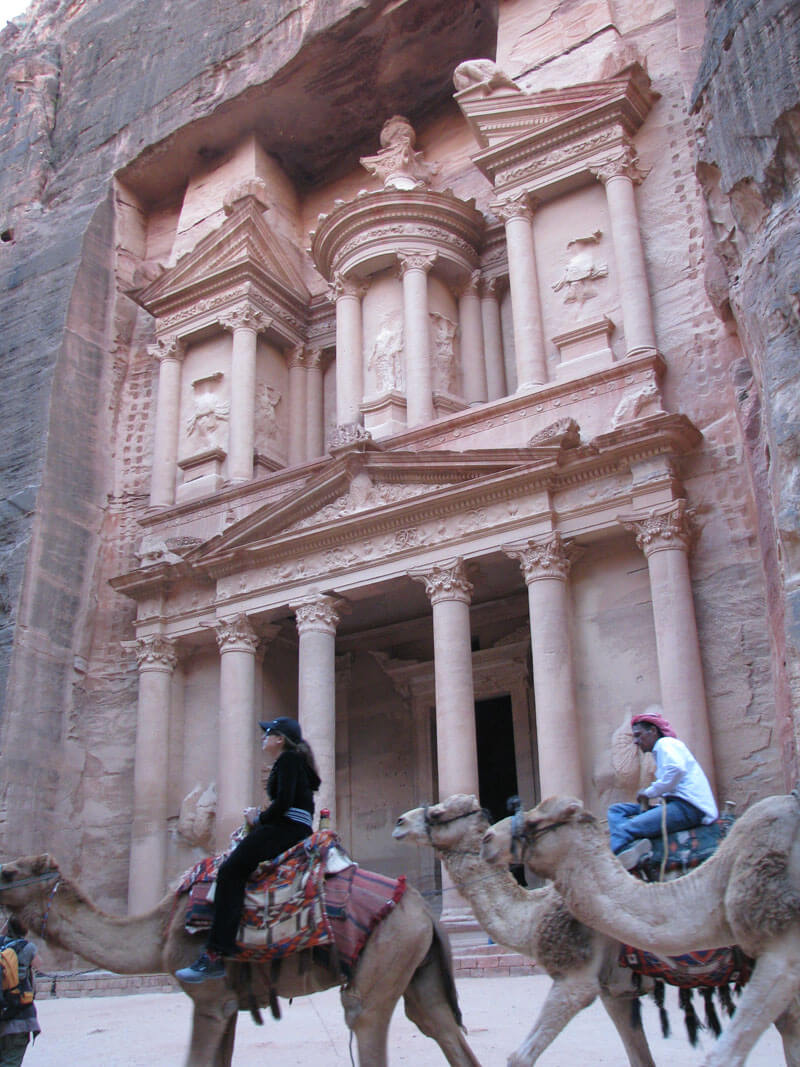 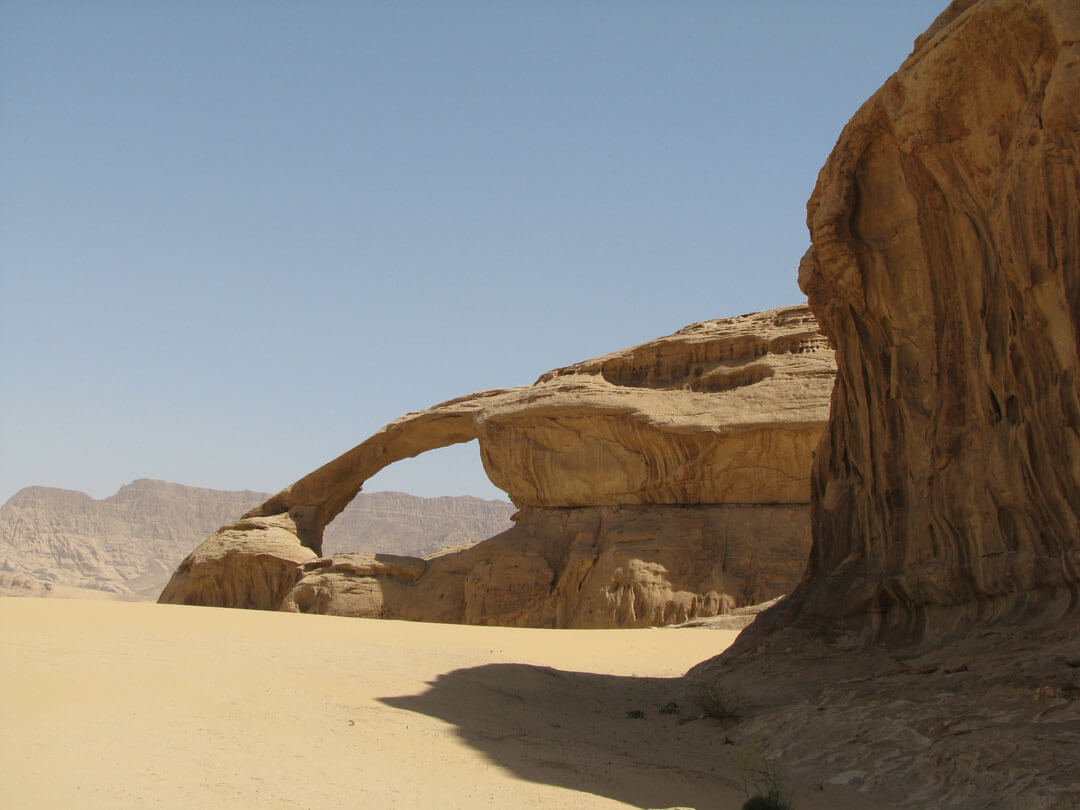 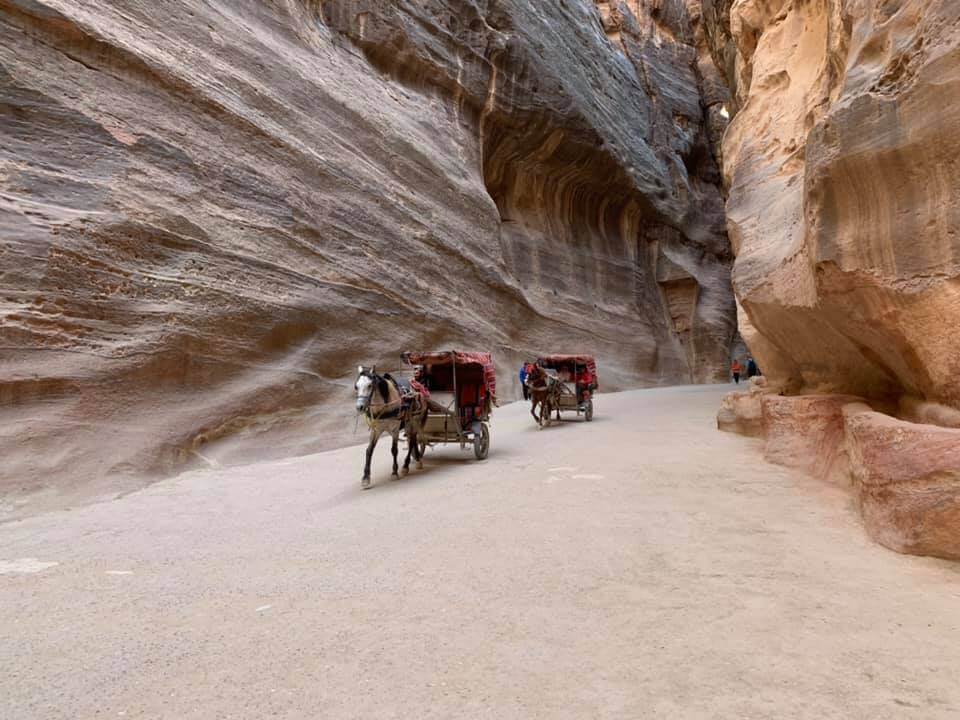 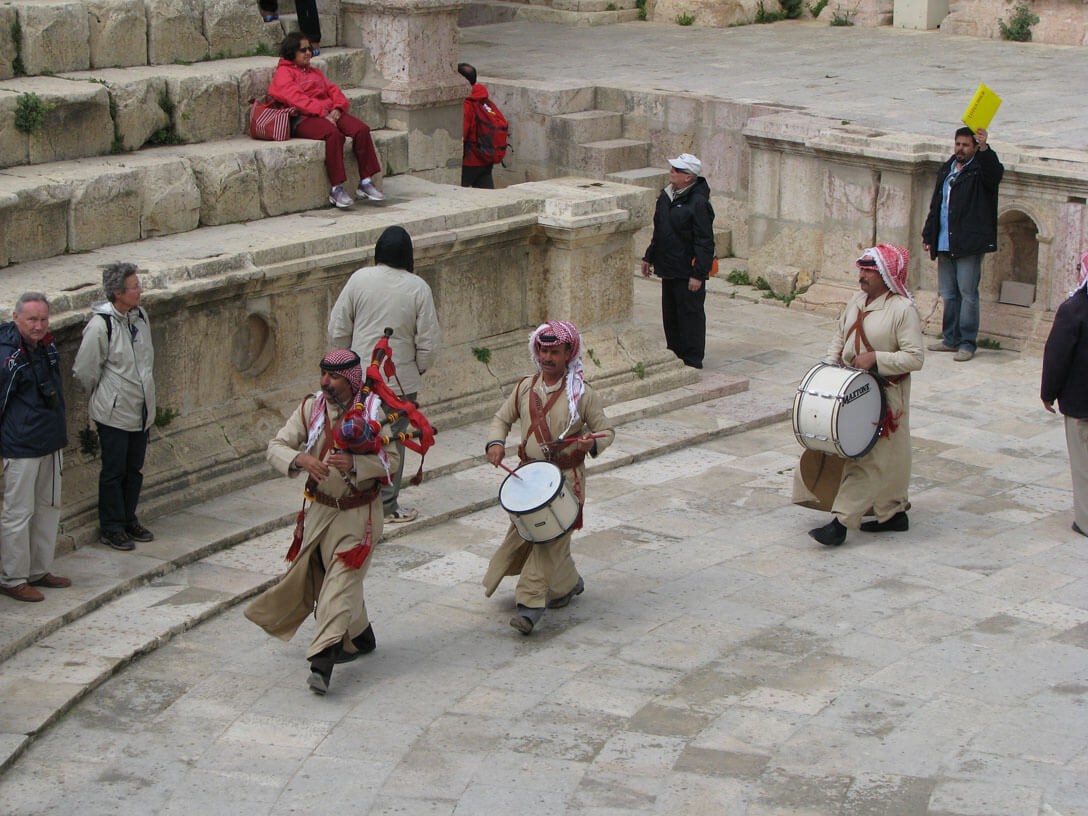