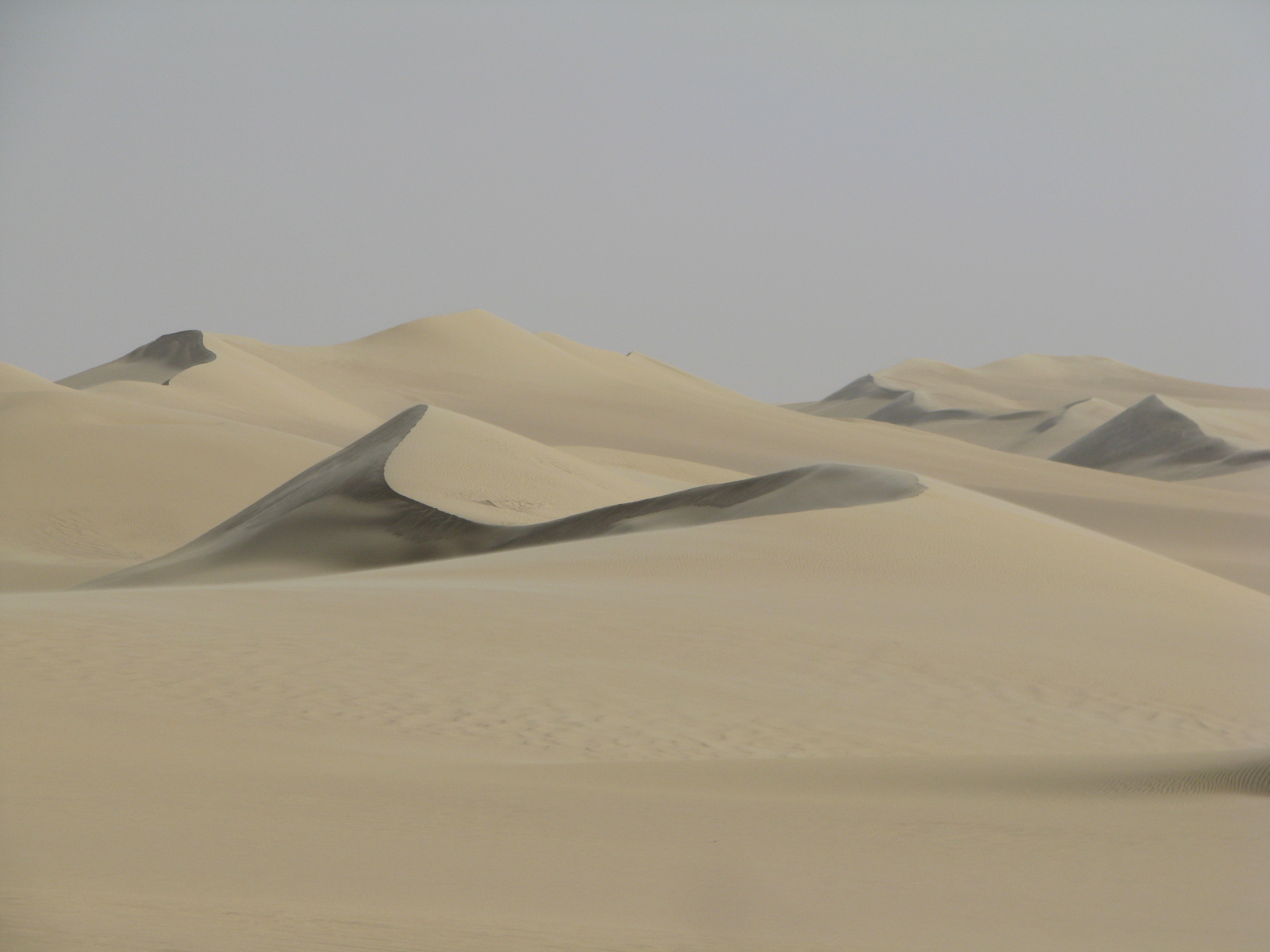 It's been a long time since I heard about the wonders of the Western Desert scenery until that morning when I was asked if I would like to join such a trip.

The list of twenty lucky participants was quickly closed. Getting organized: Flight ticket to Cairo, visas to Egypt - shall we get? Or maybe we will not accept it? When it all worked out, it was only to look forward to the long-awaited date.

That's how we drove a group of 21-69-year-olds, nature-loving, desert, and field-driving enthusiasts.

The Western Desert is part of the Sahara Desert and covers two-thirds of Egypt's territory. This is the arid region of the Sahara. Egyptians live on only ten percent of Egypt's area, along the Nile Valley and the Delta of the Nile. Most of the state land is deserted, with no dirt roads, no roads. The origin of the name al-Sahara is a French disruption of the alias Sahcrawi which means in Arabic - a man who lives in an arid desert. This type of desert is precipitation less desert, and no sheep od goat can be herd around.

We started the journey from Cairo towards the Siwa Desert Oasis near the Libyan border, a trip of about 750 km.

The road started along the Mediterranean Sea, and so we reached our first stop in el Alamein. It was here, at the end of 1942, during World War II, that the British Army led by General Montgomery, defeated the German and Italian fighters led by Field Marshal Rommel. Here, the advance of the German army was stopped, and the danger of destroying half a million Jews living in the Land of Israel was removed. There is an Egyptian War Museum at the site.

Towards evening we arrived at Siwa Desert Oasis. Around one million palm trees are grown in the area, used by locals for food, reinforcing their homes, heating, and medicine. There are two huge lakes with brackish water Siwa. It is believed that west of the Nile, there is an underground channel that flows under the Western Desert. In the center of the hilltop is Shali, the ancient village of Siwa whose houses were built of mud.

Siwa was settled during Ramses III. In Siwa is the temple of Amun, dated to ancient Egypt. In the sanctuary sat the Oracle, a distinguished religious priest answering questions about the future, which even Alexander the Great consulted. There is a hieroglyphic script at the temple.

We stopped at Cleopatra Spring, which is a bathing and refreshing place.

Because Siwa is very close to the Libyan border, the continuation of the route requires the escort of Egyptian border guards.

Big is a relative matter, and there's plenty of a desert all over... The Great Sands Sea is seven times the area of ​​Israel. About 800 X300 km, from north to south. It is the world's largest sand desert. The annual rainfall is 0 to 5 mm of rain. There is no life in this desert.

It’s been told about the Persian army of Cambyses II, that in the 6th century BCE, he tried to attack the Oracle Temple in Siwa, walking about a month in the desert, without water. Fifty thousand soldiers disappeared in the sea of sand. To this day, research delegations come looking for their traces.

The Great Sands Sea is built of endless dunes and endless 100-meter-high sand ridge. The soil is virgin, the wind drives the sand, and shapes the dunes. No matter how many traces we left, the next hikers would meet smooth dunes.

Forget about the big dune in Ashdod, forget about the Halutzah dunes, forget about Wadi Ram in Jordan. The Western Desert is something else entirely. ‘Giving gas’ in the dunes of the Great Sands Sea produces lots of adrenaline, great fun. Admittedly, sometimes you sink and need to push or been dragged, but that only increases the pleasure.

You must go on such a journey equipped with several jeeps. If the vehicle breaks down, you are dead. You are hundreds of miles away from any community; there's no point in getting started to walk. We crossed the Great Sands Sea in two days.

Suddenly we reached the Russian well, a water pipe that flows water out of the ground. The Russians tried to find oil in the early 1970s. They couldn't find oil and left when water came out of the earth.

After crossing the Great Sands Sea, we arrived at the Farafra Oasis. In the Farafra, a surprise awaits us, hot springs of water that break from a depth of 3 km to an artificial pool. Bathing is just so fun in the middle of the desert after such a long drive.

The White Desert is built of white limestone that sank into the sea at a depth of 20-50 meters. It was a sea area that formed limestone sediment about 60 million years ago, so we stood on an ancient bottom. The place is today about 600 km from the Mediterranean Sea. There are thousands of limestone mushrooms around, up to 20 meters high. It is surrealistic stone sculptures created by wind erosion.

Suddenly we came to Jara Cave - a hole in the ground, which leads to a karstic cave containing hundreds of stalactites. The stalagmites are covered by sand, which is continuously penetrating the cave. It seems that the day will come, and the cave will be filled with sand.

The Whale Valley in Wadi Al-Ryan

The Sea of ​​Tethys that once covered the entire area emptied about 40 million years ago. When the sea drained, the animals that lived there were trying to find low places that had not yet been drained of water. However, even these places eventually dried up. When this happened, dozens of fossilized skeletons of whales and marine animals were left —a fantastic look.

Back to Cairo. Bringing back the jeeps and for the sake of diversity, we took a bus trip today. We visited the Giza pyramids and the sphinx guarding one on of the pyramids. We visited the Ibn-Ezra synagogue, where the Cairo Genizah was gathered. A Genizah is a storage of sacred objects of paper no more in use. When found - it allowed investigating thousands of documents that testify to the life of the Jews in Egypt in the 9th-19th centuries.

We also visited the Egyptian Museum, which has on display mummies and an exhibit of Tutankhamun finds.

The tour ended in the colorful Al-Khalili market, where we sipped tea at the Abu Mazen coffee shop.

You cannot finish the story without telling about the high level of service we received from the Egyptian team. A logistics jeep that accompanied the caravan and desert breaks organized by the crew. In each stop assortment of food was served, tables and chairs were arranged. In the night stops, a rug will be deployed around the dining area to withstand wind and sand. The cook prepared fine food. Sweet desserts, cold drinks, and overnight gear were provided.

I hope to lead such a trip to Egypt next winter ... 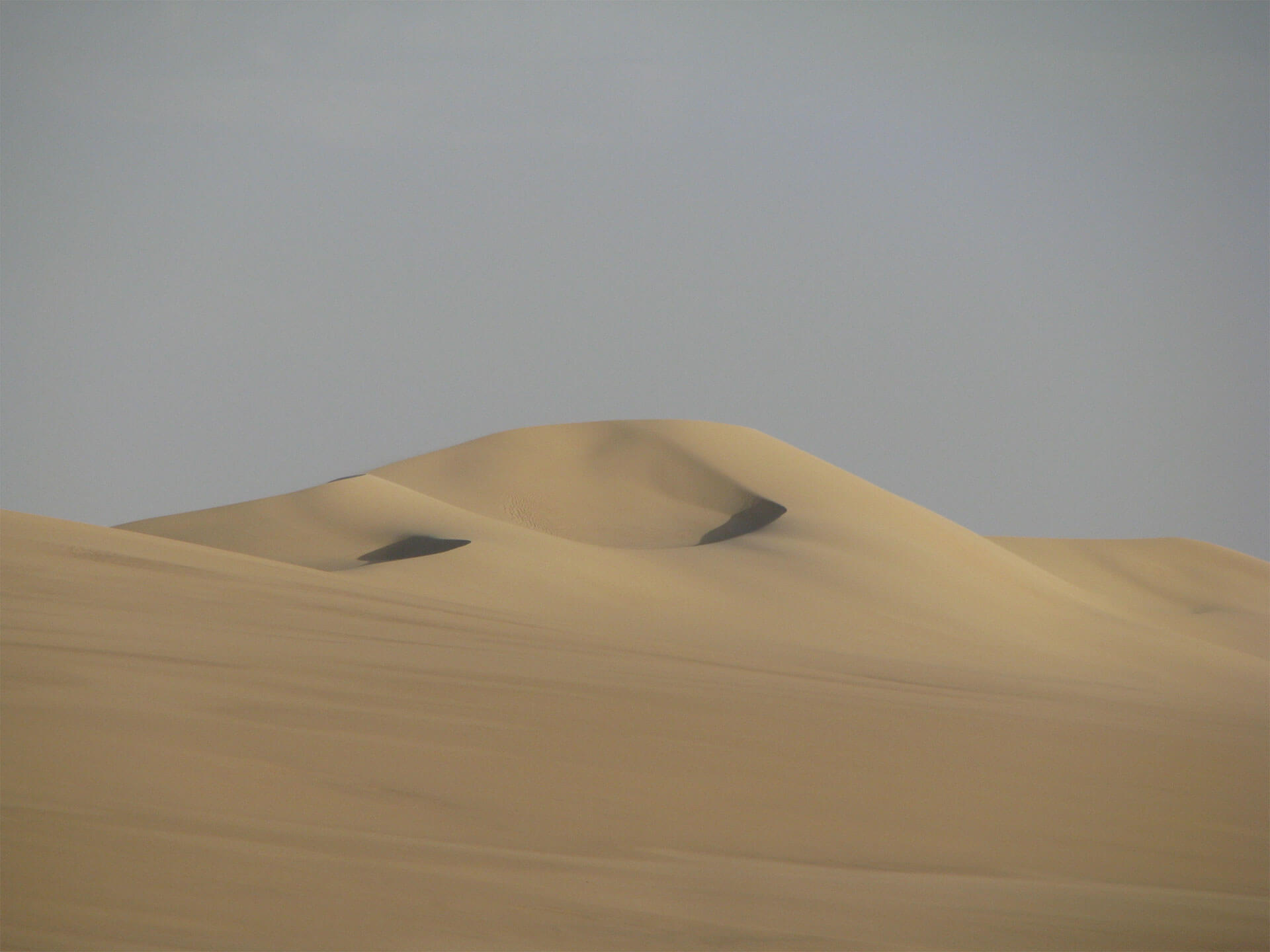 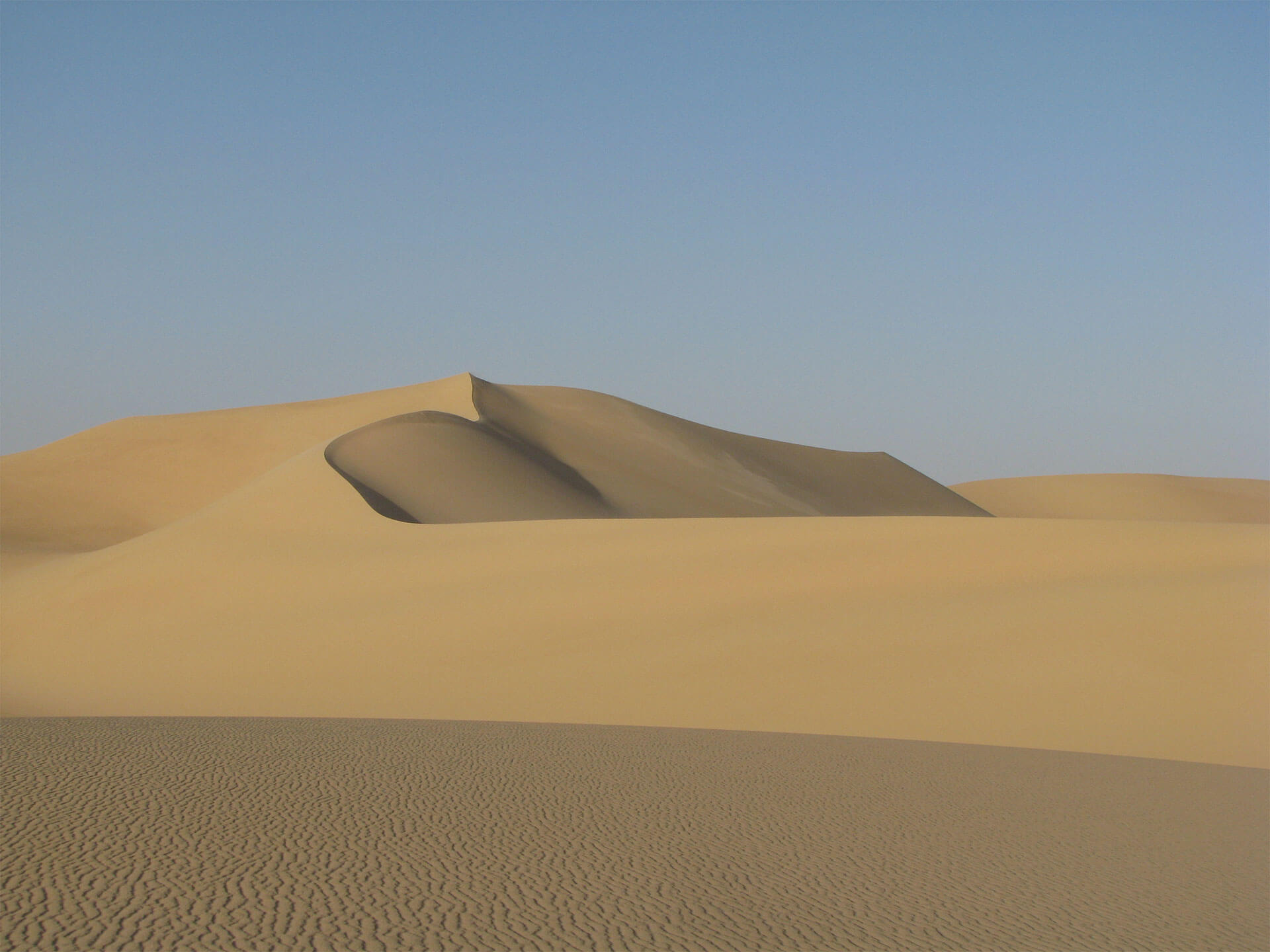 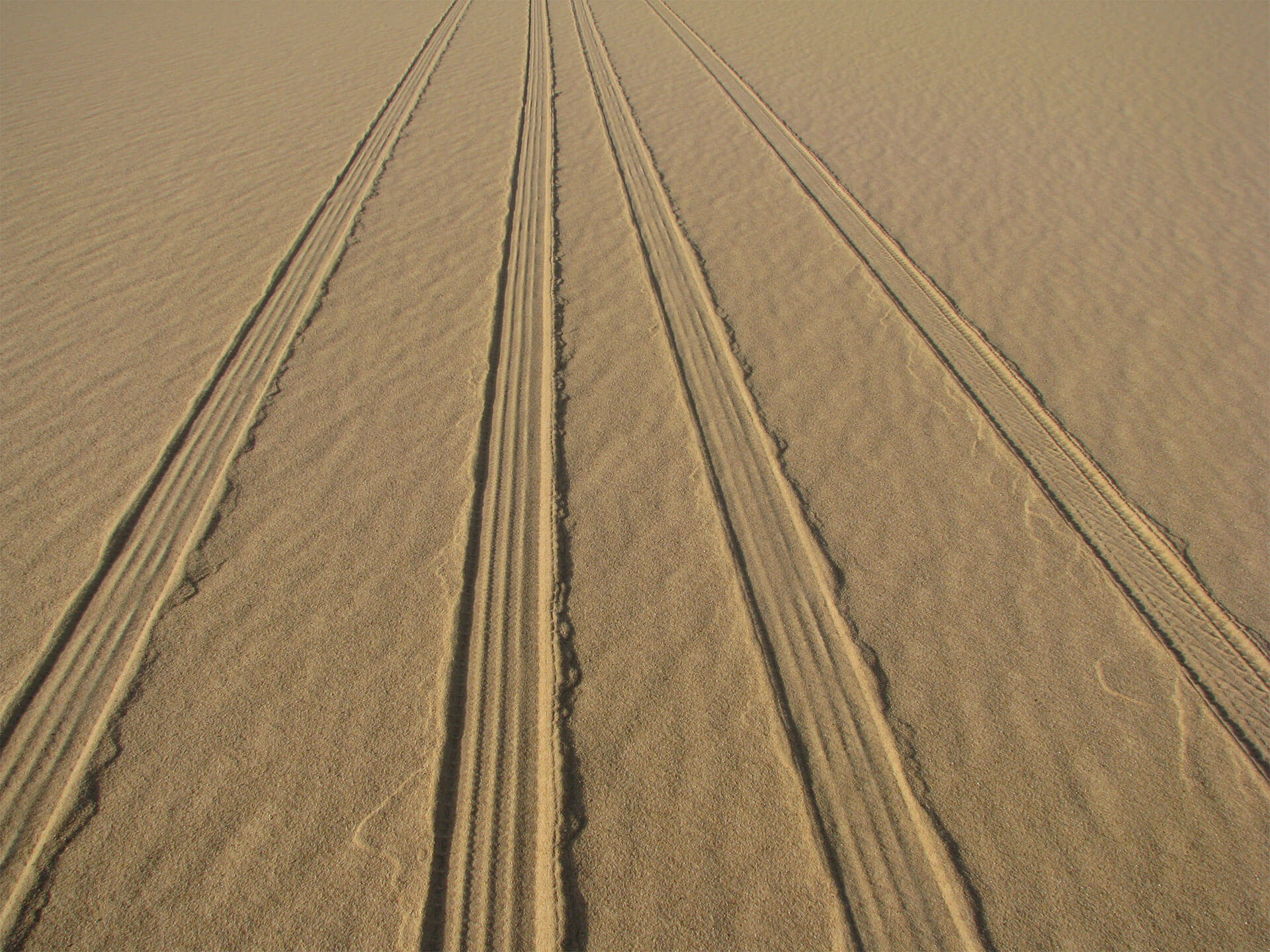 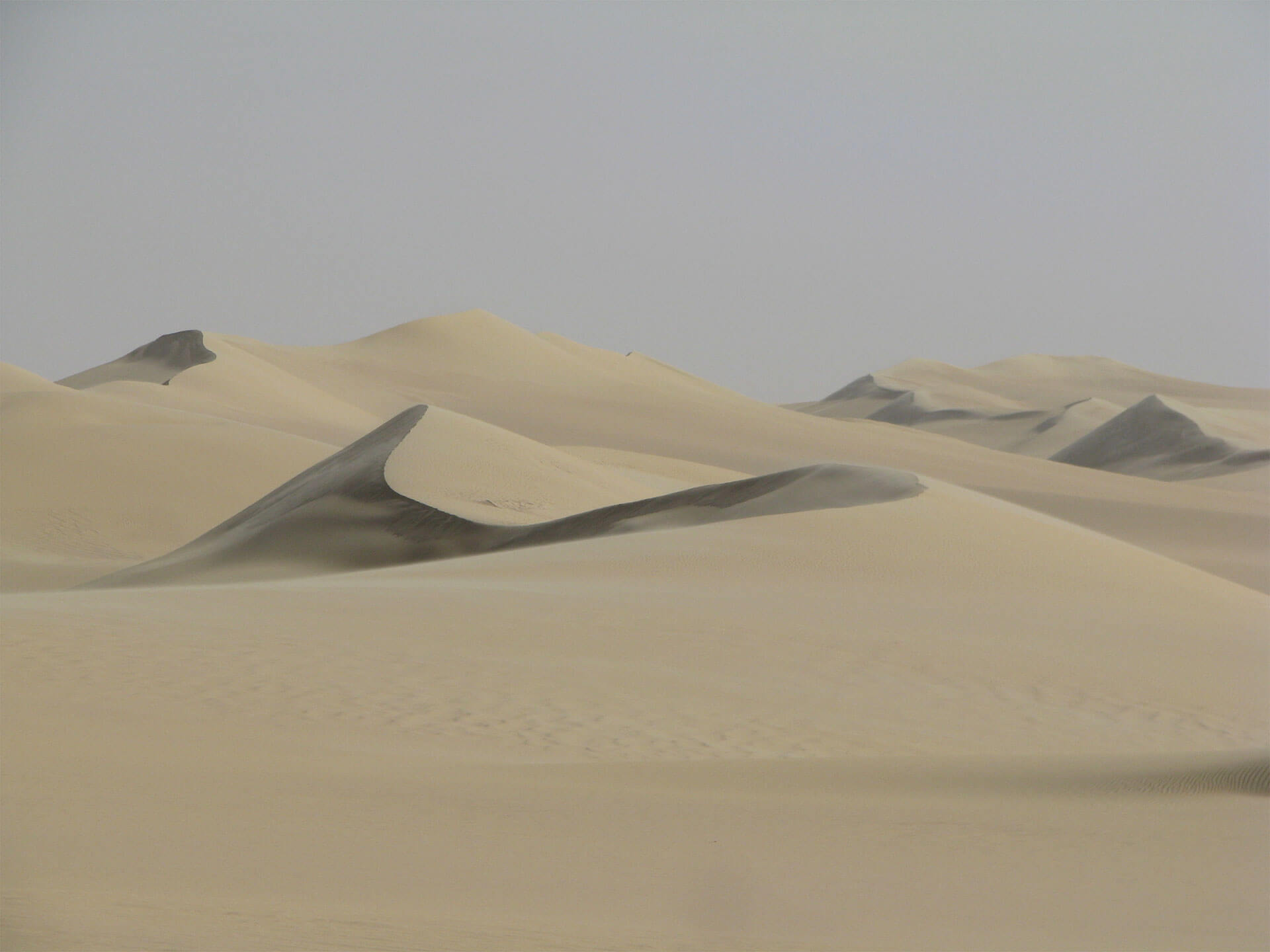 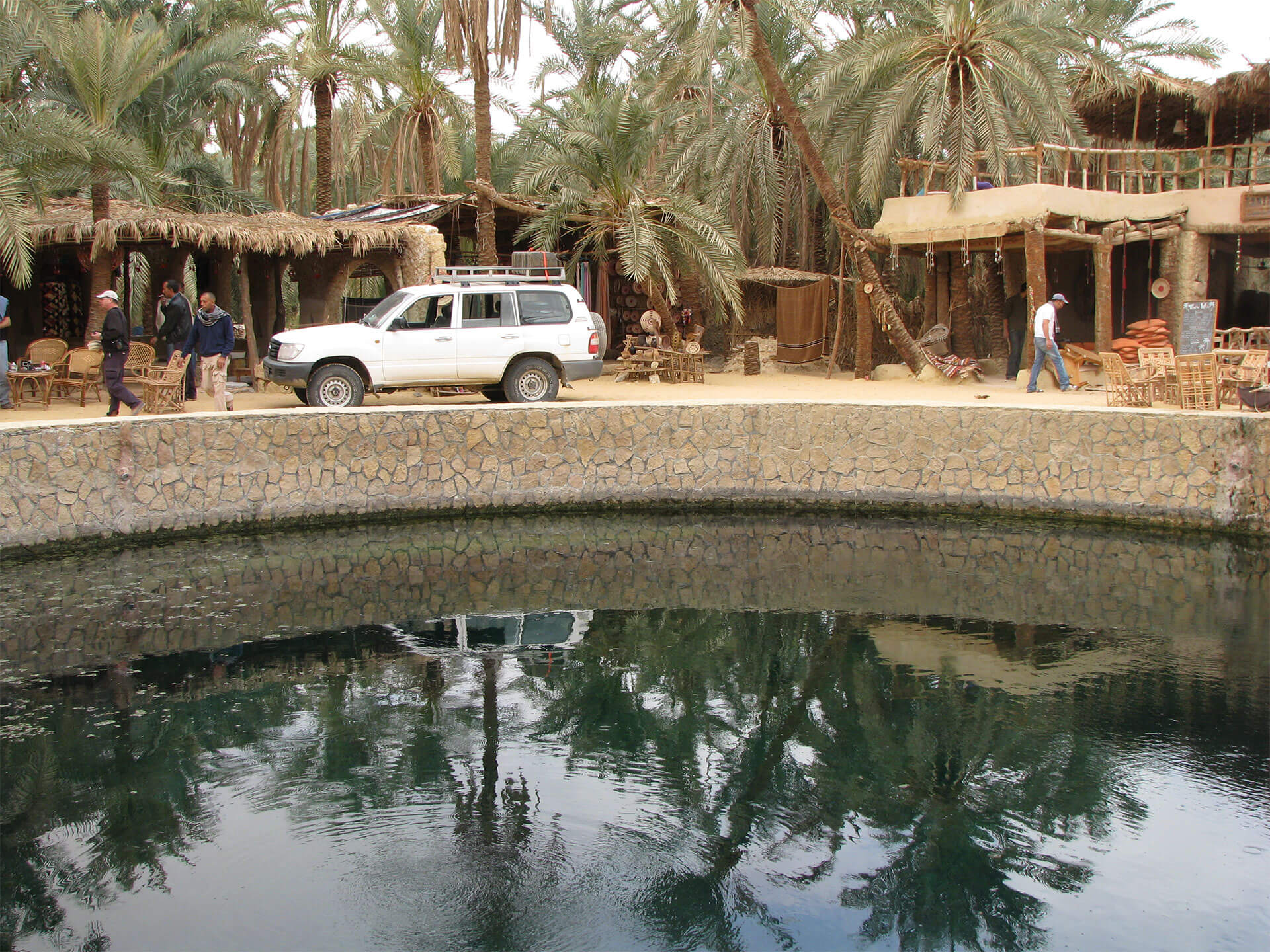 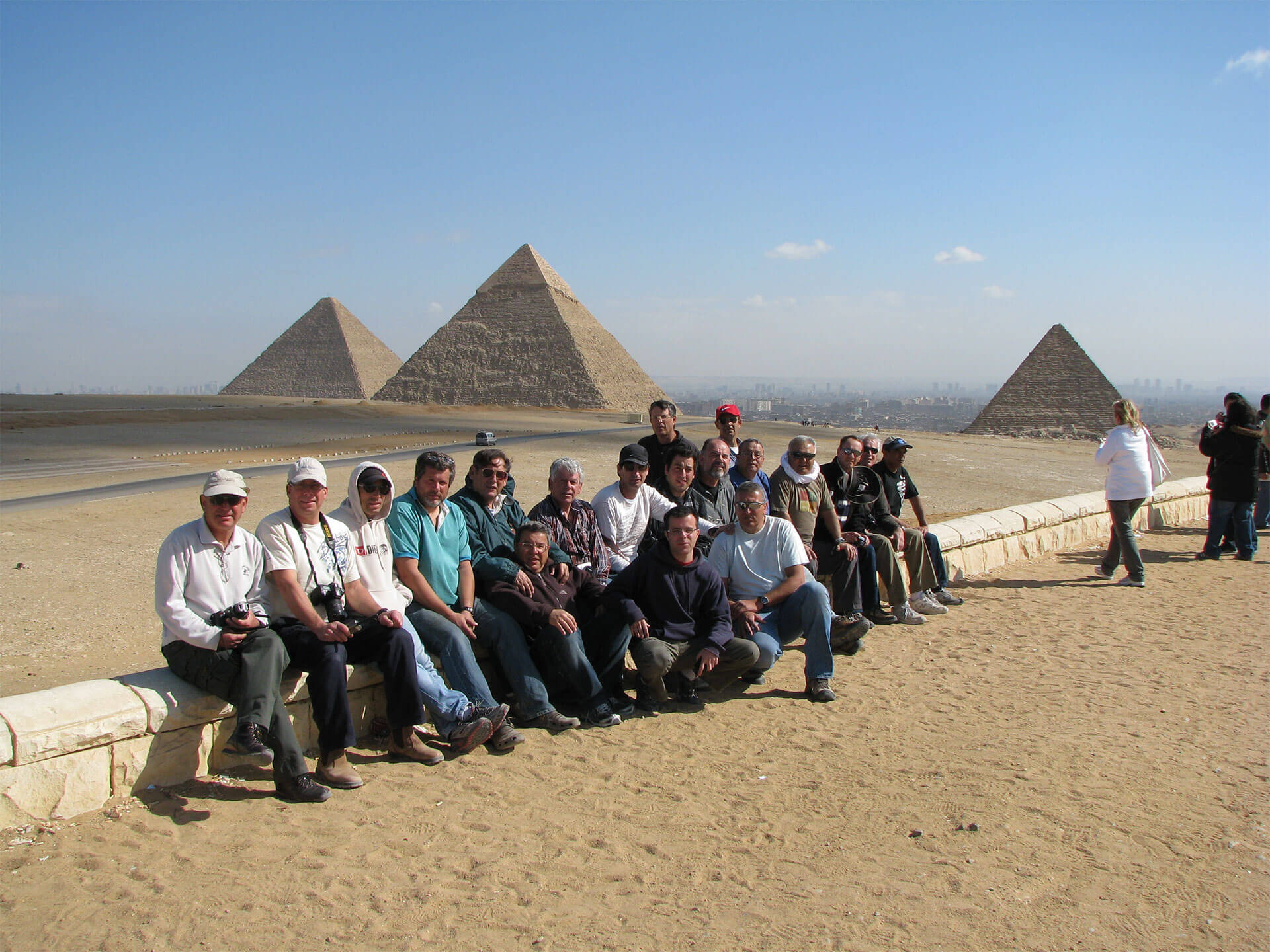 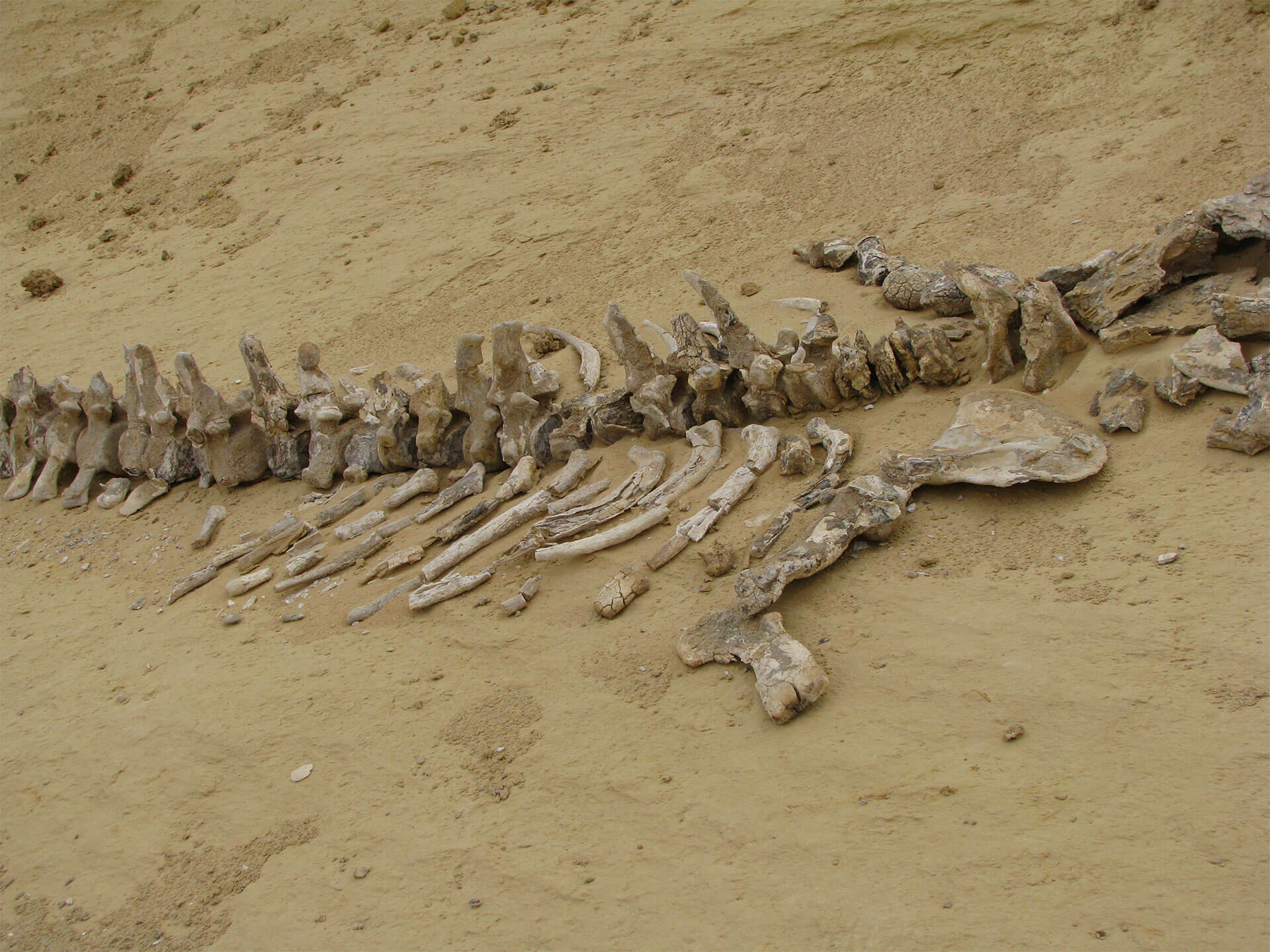 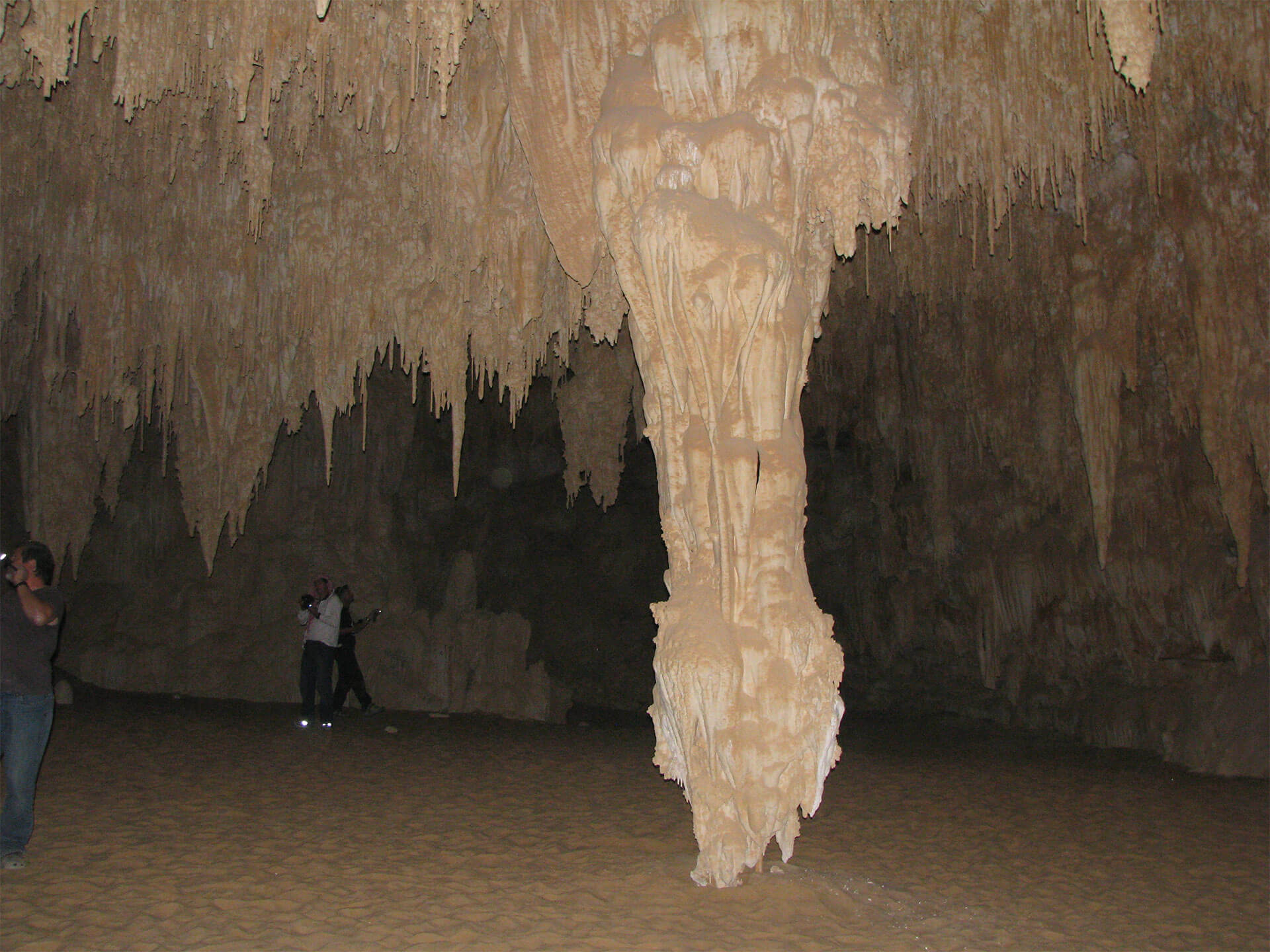 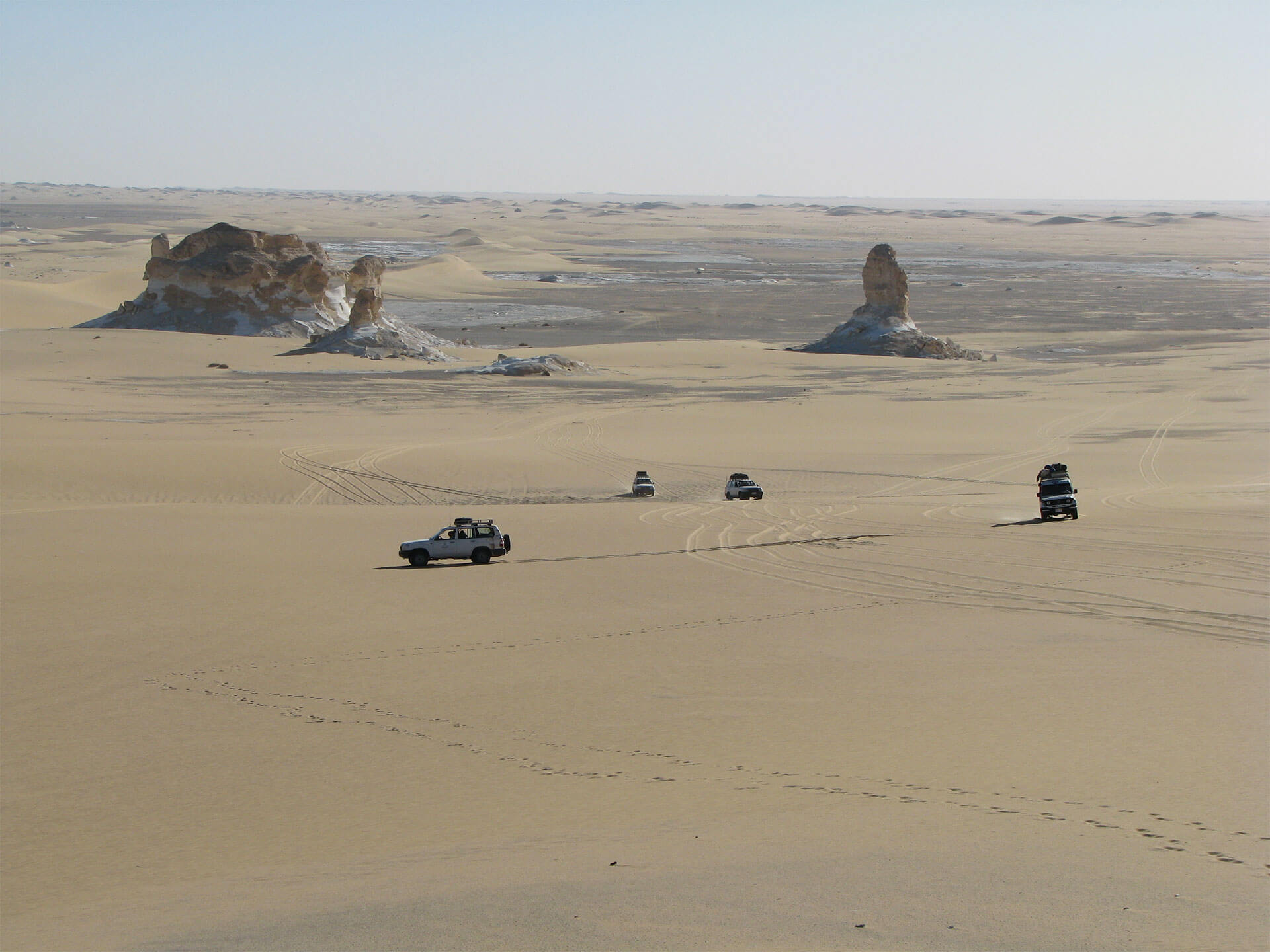